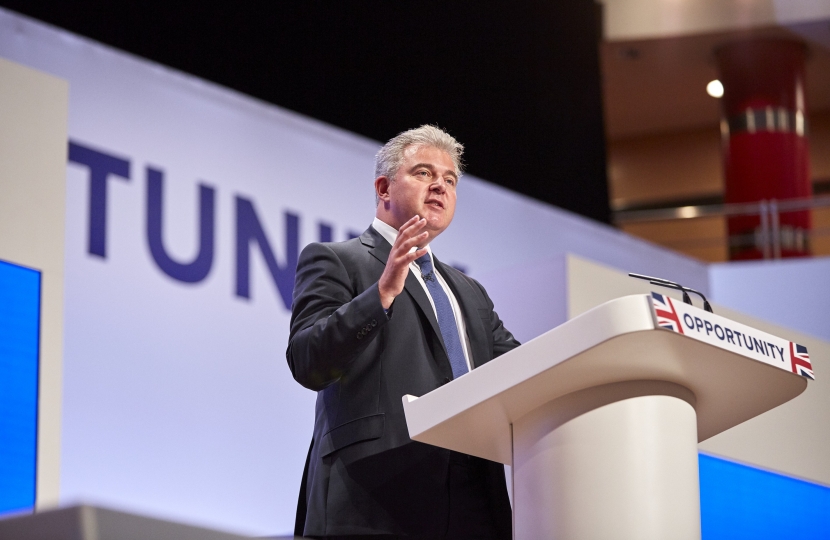 Brandon Lewis is the Member of Parliament for Great Yarmouth and Secretary of State for Northern Ireland, serving in Prime Minister Boris Johnson's Cabinet

Brandon was first elected as Member of Parliament for Great Yarmouth in May 2010. He took the seat from the Labour Party with a swing of 8.7%. In 2015, Brandon was re-elected with a substantially increased majority of 6,154.

In September 2012, Brandon promoted by the Prime Minister to Parliamentary Under-Secretary of State at the Department for Communities and Local Government. In this position, Brandon had responsibility for local councils, as well as community pubs and the fire service.

In July 2014, the Prime Minister promoted Brandon to become Minister of State at the Department for Communities and Local Government with responsibility for Housing and Planning. He retained this role after the 2015 General Election and successfully piloted the Housing & Planning Bill through the House of Commons.

Following Theresa May’s appointment as Prime Minister in July 2016, Brandon was asked to become Minister of State at the Home Office with responsibility for the Police & Fire services.

On 29th September 2016, the British Government announced that Her Majesty The Queen had approved Brandon’s appointment to the Privy Council. This appointment means Brandon now has the title “The Right Honourable.”

At the General Election in 2017, Brandon was re-elected for the Great Yarmouth constituency with an increased majority, over Labour, of 7973, securing over 54% of the vote. In the subsequent government reshuffle, the Prime Minister appointed Brandon to the Home Office as Minister of State and appointed him to be a member of her Cabinet.

In January 2018 Brandon was promoted to Chairman of the Conservative Party & Minister Without Portfolio at the Cabinet Office.

As Chairman Brandon oversaw the modernisation & centralisation of the Party membership & data, as well as a record growth in membership and fundraising. This period also saw the recruitment of the nationwide Campaign Manager program.

After the resignation of Theresa May as Leader of the Conservative Party, Brandon organised the subsequent leadership election process to elect a new party leader. This included a ballot of more than 160,000 party members and a series of election hustings around the country, culminating in the largest gathering of Party members in modern times, estimated at over 5,000 members at the final leadership event, at the Excel. Towards the conclusion of this internal party election, Brandon described his pride in the Conservative Party and its membership. The ex-Prime Minister appointed Brandon a Commander of the British Empire (CBE) in her Resignation Honours List.

On 24th July 2019, Brandon was appointed Minister of State at the Home Office, with responsibility for national security, in Boris Johnson's first Cabinet.

Following the election of Liz Truss as Leader of the Conservative Party and her appointment as Prime Minister, Brandon rejoined the Cabinet as the Secretary State of Justice and Lord Chancellor.

At the Brexit General Election on 12th December 2019, Brandon more than doubled the Conservative majority in the Great Yarmouth constituency, securing 28,593 votes with 65.8% of the popular vote.

Professionally, Brandon originally qualified as a barrister and has a BSc Economics and LLB Hons (Law) from the University of Buckingham and an LLM in Commercial Law from King’s College London. Married with two children, Brandon relaxes in his limited free time by enjoying a variety of sports with a focus on triathlon, reading, his dogs and occasionally going to the cinema. Always ready to take a personal challenge he completed the London Marathon in 2005 and 2008 and took up triathlon in 2011. During the 2020 Covid Lockdown Brandon completed a Castle Series virtual half ironman event (21.1km run, 90km bike, 10km run) and raised almost £20,000 for Macmillan Cancer Support.

Before joining the government, Brandon was an active member of a number of All Party Parliamentary Groups including those for Enterprise Zones and Local Growth as well as Local Government, Greyhound Racing and the Film group. He was Co-Chair of a group on Coastal Erosion and continues to work with colleagues who represent other coastal towns to highlight common issues in their constituencies.