We need an election to stop Corbyn's EU surrender 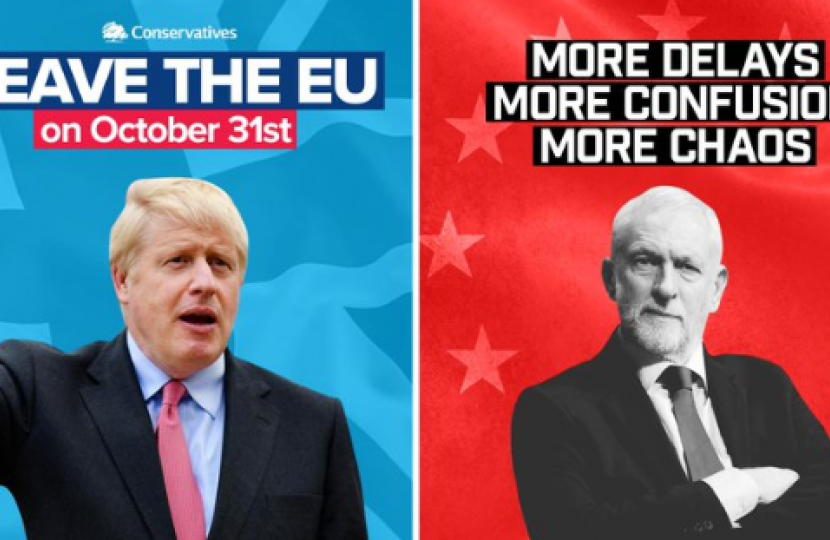 From the moment Boris Johnson was elected Prime Minister he made it clear the country would leave the European Union on 31st October, whatever the circumstances. No ifs, no buts. We must respect the referendum result. Working alongside the Prime Minister I continue to do everything possible to make sure we deliver the result of that referendum. At every opportunity, I have voted for Brexit in Parliament. My Labour opponents both in Westminster, and here in the constituency, are determined to ignore the views of the people of Great Yarmouth. They want to overturn the decision made in the referendum. I will not allow that to happen.

LABOUR WILL CANCEL THE REFERENDUM AND STOP BREXIT

Despite what Labour will tell you on the doorstep, here in Great Yarmouth, they have used every opportunity possible to ignore your decision in the referendum. Jeremy Corbyn is determined to stop Brexit. As a result, Labour has blocked the implementation of Brexit over 30 times in Parliament.

In contrast, the Government is turbocharging preparations for a No Deal Brexit. We are making sure all necessary funding is made available, so we will be ready to leave by 31st October. This will ensure our borders, ports and businesses have the capacity and infrastructure they need for all eventualities. We want to realise the benefits of Brexit and deliver a strong economy to fund better schools, improvements to our NHS and recruit more police officers. Outside the EU we can lower taxes, invest in our public services and cut the cost-of-living.

A CLEAR CHOICE: BORIS JOHNSON’S PLAN TO LEAVE ON 31ST OCTOBER - OR A COALITION OF CHAOS WITH JEREMY CORBYN SURRENDERING AND KEEPING US IN THE EU

Our Labour, Lib Dem and SNP opponents continue to disrupt our Brexit negotiations, blocking our exit at every turn. Their position can only mean one thing – surrender to Brussels.

And that’s why a General Election is needed now! The people must decide whether they want Jeremy Corbyn or Boris Johnson to lead our negotiations in Brussels. The choice is: Corbyn who will go to Brussels with his Surrender Bill and beg for an extension – accepting whatever Brussels demands, meaning a bad deal for Britain, more uncertainty and more delay. Or Boris, who will go to Brussels and negotiate a new deal, but ultimately get Brexit done by 31st October.