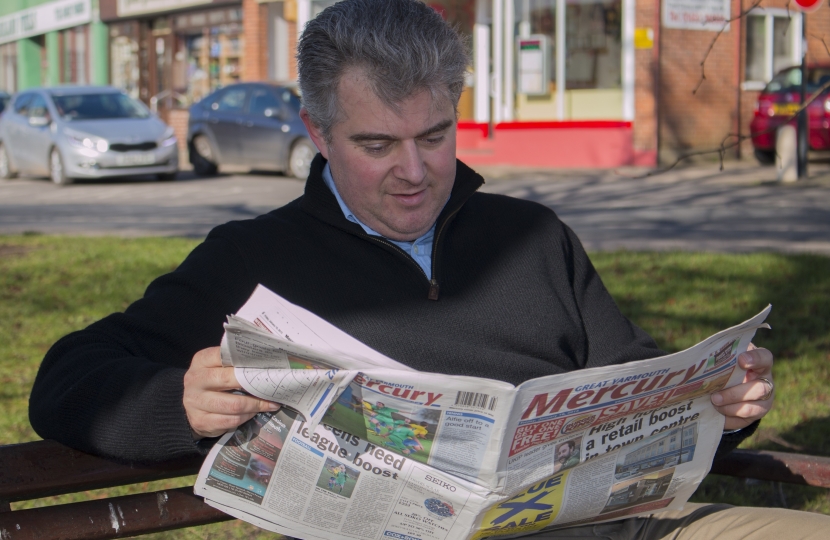 Every dam eventually has to break. At the recent General Election, that dam broke spectacularly. It was so unexpected, most media experts and almost every politician had not anticipated something on this scale. Boris Johnson not only won a comprehensive election victory but now leads a Conservative-majority Government with the biggest majority for any government since 2005. That means we can get on with getting things done, starting with delivering Brexit.

As I return to Westminster to resume my parliamentary duties, I am mindful that it is always a privilege to serve the people of Great Yarmouth. I am particularly humbled that at this general election over 28,000 voters put their trust in me to represent our area once again. To everyone who voted, thank you.

That representation can only be done by spending time in Parliament and getting in amongst the thick of it in London, something my opponents in Great Yarmouth often forget. They have focussed at the last three elections on how much time I spend in Westminster. They desperately try to portray this as a bad thing, forgetting that we elect our MPs to send them to the House of Commons, to get things done.

The wise voters of Great Yarmouth have now rejected Labour’s petty personality politics on four occasions. They understand they need an MP who is prepared to use their influence in Westminster to get a better deal for our area and its residents.

They wanted someone who uses every opportunity to remind the Chancellor of the Exchequer of the plight of Great Yarmouth motorists and the impact of fuel duty on their everyday lives. As your MP in Westminster, I worked with colleagues to convince the then Chancellor to freeze fuel duty, something each of his successors has carried forward.

I will continue to work to deliver for our local NHS. As your MP in Westminster, I voted for the most significant cash injection in the NHS’ history. This will result in improvements to the James Paget Hospital and the delivery of a new scanner for cancer diagnosis.

I think we all wanted someone who would respect the result of the referendum and deliver Brexit. As your MP in Westminster, I promised that I would make sure your democratic choice was delivered. That’s why I voted for Brexit at every opportunity, while Labour tried to scupper it. The week after the election, on December 20th, I voted with colleagues to pass the first stage of the Withdrawal Bill. When Parliament returns on January 7th, I will be at the despatch box taking the next stage of that Bill through Parliament to ensure we leave the EU, as promised, on January 31st.