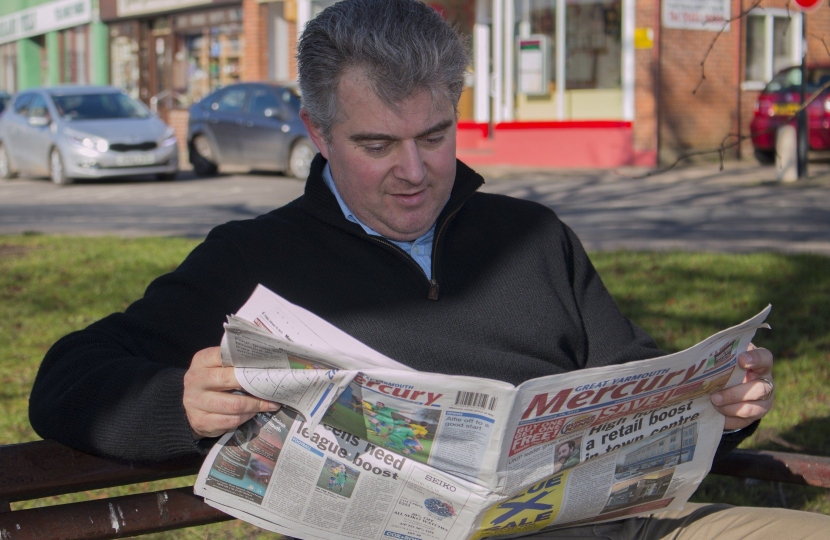 When I sat down to write this month’s column, I had thought it might be a Brexit free zone. After all, it has dominated political debate since the referendum. And whilst the Prime Minister continues to push the British case with European leaders to make sure we get a Brexit deal that means we leave the European Union on 29th March, I am mindful that there are so many other national and local issues that concern Great Yarmouth residents. For example, I’ve been working with the council to set up a meeting between the A47 Alliance and Transport ministers in Westminster. The aim is to continue lobbying, whilst building our business case, for further A47 improvements to include the duelling of the Acle Straight.

Yet, at the last minute what many have suspected would happen has. Jeremy Corbyn has decided to ignore the will of the people – a clear decision made by the British people – and is now pushing for a second referendum. It conveniently forgets that we don’t need a ‘People’s Vote’ as we had the ultimate people’s vote during the 2016 referendum. This announcement will be wrapped up as a way to avoid a no deal Brexit, but in reality, it is an attempt to commit Britain to a Custom’s Union or to stop our departure completely. Corbyn also wants a “close arrangement” with the Single Market. Two things that the public decisively rejected in the referendum. As local MP, I’ve been consistent in saying that in order to leave the EU, we must also leave both the Customs Union and the Single Market.

Instead of working to bring the nation together post-Brexit, Labour is backing another unnecessary vote that will sow further division and widen splits across our country. The last thing we need is months of uncertainty as we prepare for a new referendum. It’s our duty as MP’s to deliver Brexit, get the best deal for Britain, secure new global trade and look to the future with confidence. Throwing our hands up in despair and declaring “this is all too difficult let the people decide” is nothing short of betrayal.

I welcome the news that Norfolk Police will receive an extra £11.4 million to tackle crime and keep our streets safe – an increase of 6.9% from last year.