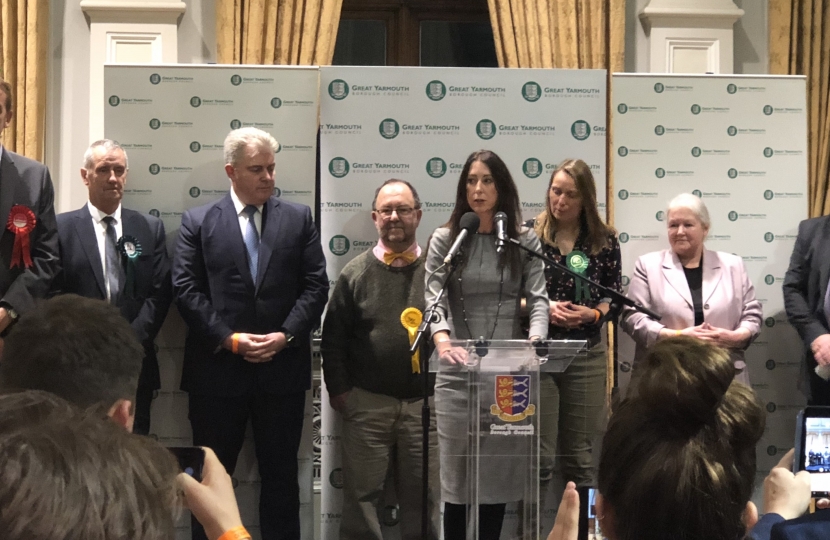 After a hard-fought General Election campaign, called to break the Brexit gridlock in the House of Commons, Great Yarmouth's Conservative candidate Brandon Lewis has emerged victorious after securing election for the fourth time. In doing so he more than doubled his previous majority, to almost 18,000 votes and over 65% of the vote.

Speaking moments after the declaration at Great Yarmouth Town Hall Brandon said he was humbled by the faith voters had put in him and their determination to get Brexit done. "With a Conservative majority, Boris Johnson's new government can now deliver on our election promise - we will leave the European Union on January 31st next year", confirmed Brandon.

"That is what the voters of Great Yarmouth have demanded since the referendum in 2016. Yet, the local Labour party seem in total denial and failed to mention Brexit in their main election literature. Contrast that with a Conservative team that campaigned and listened to residents in every part of the constituency, and explained how a Conservative government will concentrate on their priorities post-Brexit - funding the NHS, combatting crime and improving all our schools."

At a local-level, Brandon vowed he would continue the campaign for the dualling of the Acle Straight and further improvements to the A47. "We've seen Conservative investment in Great Yarmouth, I know that will continue with the extra-funding to improve facilities at the James Paget Hospital. We also need to keep Great Yarmouth moving, that's why the Third River Crossing is so important and I will still be a loud voice in calling for the Acle Straight to be dualled."

The final General Election result in Great Yarmouth was: